11 Essential Elements of the Anti-Carding Campaign

I recently wrote an essay calling on the people of Toronto to end carding by refusing to share their personal information with the cops. They should meet any question from the cops with "Am I free to go?"

The following elements should be used in any neighbourhood-based, grassroots led and organized anti-carding campaign:

Create Neighbourhood Based Organizations: Each racialized, working-class neighbourhood should establish a participatory democratic organization to plan, direct, manage and co-ordinate the campaign to refuse co-operating with the carding regime and to push back against police violence in general.

Develop Cop Watch Programs: Each neighbourhood should create a Cop Watch program to patrol, monitor, record, film and resist the violent behaviour of the cops. From the days of the Black Panther Party's cop watch patrol to today's Cop Watch projects, the police do not want to be observed and documented by residents. The Network for the Elimination of Police Violence (NEPV) has produced a guide on the dos and don'ts of filming the cops. 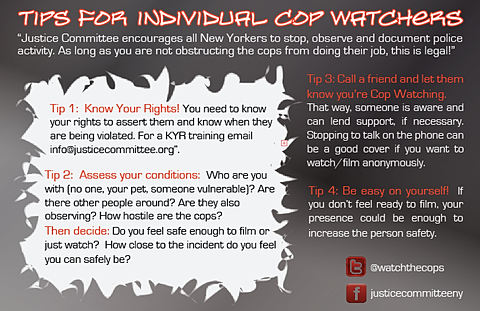 Use Smartphone App to Record the Cops: NEVP has created the Cop Watch Video Recorder app that records and uploads your interaction with the police. Encourage all members of your neighbourhood to download the Cop Watch app and be ready to use it to document you and your neighbours' dealings with the police. Generally, cops do not like to be filmed. It tends to moderate their use of force as revealed by a Canadian research project.