Police carding regulations amount to putting lipstick on a pig

By the Network for the Elimination of Police Violence ; September 7, 2015

The Network for the Elimination of Police Violence (NEPV) rejects the call from the Government of Ontario to retain carding by regulating the practice. Carding is a street harassment practice by cops across Canada that involves the stopping and questioning of civilians in non-criminal interactions and documenting their personal information. 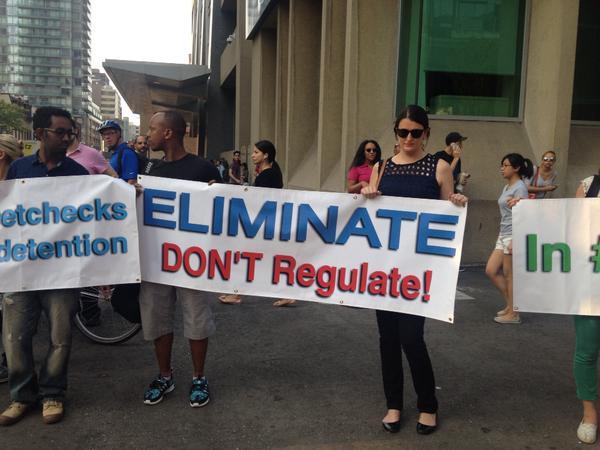 Carding must be abolished now! We call on all organizations and individuals who are truly interested in community safety to boycott Premier Kathleen Wynne’s public manipulation (consultation) process, and maintain no false illusions about the Ontario government's willingness to engage in genuine dialogue with the communities most affected by police violence.

This manipulative exercise is an attempt to win moral legitimacy for the repressive, human rights denying practice of carding by providing a false veneer of racial sensitivity, public accountability and community direction to what is in fact a clear expansion and consolidation of the carding regime.

This strategy can be plainly identified in the recent statements by Ontario's Minister of Community Safety and Correctional Services, Yasir Naqvi, in which he simultaneously promotes the government's supposed “zero tolerance” approach to racial profiling and enduring commitment to human rights, while continuing to describe carding as “a necessary and valuable tool” in the arsenal of the police.

Naqvi would have us believe that police officers in Ontario already hold a sincere commitment to human rights and a zero tolerance approach to racial profiling, as enshrined in the Ontario Police Services Act, despite the obvious evidence to the contrary.

There is no justifiable reason for carding abolitionists or reformists to celebrate Minister Naqvi’s recent restatement of his June 16 assertion that the regulation of carding will respect the Charter of Rights and Freedom as a victory of sorts. The government is still committed to imposing this form of police violence (carding) on the people of Ontario before the end of 2015.

Many carding opponents are being misled by the following comment from Minister Naqvi, “We have heard from the community that street checks [carding] by definition are arbitrary as well as discriminatory and therefore cannot be regulated – they must simply be ended. The province agrees that these types of stops must end.”

Carding has never been an arbitrary exercise. It is high time for us to stop framing this form of police violence as a random act. The cops are intentionally targeting specific groups. Why is it that African-Canadians in Toronto are carded at rates that are 5-10 times higher than their white counterparts in neighbourhoods that are predominantly white, have very low rates of crime and are relatively wealth?

The cops claim that carding is needed for intelligence gathering in areas with high levels of documented criminal activities. The police in affluent neighbourhoods might not have received the memo to not engage in racial and class profiling on their beats.

Carding is a deliberate scheme that promotes racial profiling and class profiling against oppressed groups in society. Carding is doing exactly what it was designed to do, which is the over-policing and constant surveillance of groups that are seen as potential threats to the preservation of this oppressive society.

Carding does away with the established practice of reasonable suspicion or reasonable and probable grounds as the basis for carrying out a warrantless detention. The racialized and working-class people who are stopped in the streets are being psychologically detained. They feel compelled to give the cops their personal information in these non-criminal encounters.

NEPV has been very clear in its position --- carding must go! We see nothing of value in a tool that pre-criminalizes our communities, targeting, and harassing people who are not criminal suspects. Intruding into our communities and forcefully gathering random information on residents should be seen as what is really is: an occupation force spying on innocent civilians.

We should not assist the police or the regime at Queen’s Park in designing the terms of the occupation of our communities and the regulation of our physical movement.

We call on all concerned organizations and individuals to actively resist efforts at masking the abhorrent process of carding. Instead of sitting down to discuss how to reform these illegal, highly intrusive and completely discriminatory practices, NEPV supports calls to end the victimization of racialized and working-class communities that are suffering from the violence of carding across Turtle Island or Canada.

The following declaration of support for active resistance by Frederick Douglass is just as true yesterday as it is today:

“This struggle may be a moral one, or it may be a physical one, and it may be both moral and physical, but it must be a struggle. Power concedes nothing without a demand. It never did and it never will. Find out just what any people will quietly submit to and you have found out the exact measure of injustice and wrong which will be imposed upon them, and these will continue till they are resisted with either words or blows, or with both. The limits of tyrants are prescribed by the endurance of those whom they oppress.”