"[1]  Mutaz Elmardy sues Police Constable Andrew Pak and his employer, the Toronto Police Services Board, for assault, battery unlawful arrest, and for violation of his rights under the Canadian Charter of Rights and Freedoms.  Mr. Elmardy says that he was detained by Constable Pak for no reason apart from the colour of his skin.  He says that Constable Pak punched him in the face and beat him.  He was handcuffed and held outside on a cold winter’s night for 30 minutes without any legal basis.

"[115]      While I have found that Mr. Elmardy exaggerated his evidence and his efforts to prepare his case seemed quite goal-oriented from the outset, this case is not really about money.  Mr. Elmardy cannot have expected a big payday from a couple of bruises.  I accept his desire to show that he is equal under the law and that the law applies to him as a refugee permanent resident just as much as to anyone.  I was moved by Mr. Elmardy’s expression that he came here to “feel the law.”  Perhaps one has to experience corrupt government and lawlessness to consciously feel the well-being that comes merely from being present in a country in which the rule of law matters and all are equal before and under the law.  That police officers shattered Mr. Elmardy’s feeling of the law strikes at the rule of law itself and requires condemnation by the court. 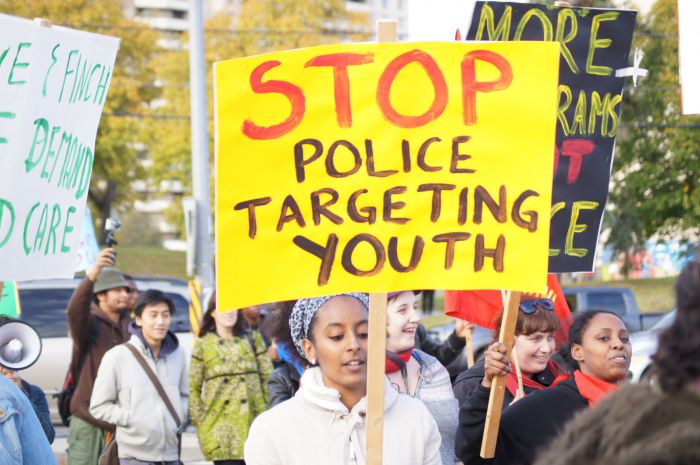 [116]      Therefore, I turn to deal with punitive damages.  For the intentional torts of battery and false arrest, in my view, a punitive damages award is appropriate to express the disapproval of the court at the deliberate and inappropriate conduct of Constable Pak.  As for the Charter breaches, administering street justice is the opposite of a society based on laws.  One who is not being investigated for criminality is allowed to walk down the street on a cold night with his or her hands in the pockets and to tell inquisitive police officers to get lost without being detained, searched, exposed to sub-zero temperatures, or assaulted.  It appears that none of Constable Pak, Constable Poole, or the other four officers who dropped by the scene knew this.  It is therefore important for TPS and Constable Pak to hear it from the court and to hear it in a manner that bespeaks the court’s disapproval and shock that such conduct might be considered acceptable in 2011.  The manner in which the officers testified in 2015 was no less shocking.  In view of the contumelious disregard shown by Constable Pak and TPS for the rights of Mr. Elmardy, in my view he is entitled to punitive damages equal to twice his aggregate award so as to triple his recovery.  Therefore I award punitive damages of $18,000."