August 21, 2014 a rookie Peterborough cop stopped to chat with a couple of guys out walking the streets of Peterborough at 4am. The constable didn't know it at the time but she was talking to Steven Yearley. Yearly was convicted of a violent sexual assault in Huntsville in 2007. The victim was beaten so badly her friends did not recognize her. The rape lasted 15 minutes before the assailant was scared off by someone passing by. Yearley escaped from prison and went on a violent rampage stealing a Hydro One truck and breaking into a number of residences. He voluntarily chose to serve 100 percent of his sentence to avoid the restrictions of parole. But when he moved back to Peterborough police issued a public safety alert and placed restrictions on Yearley as a dangerous offender. Among them was to obey a curfew from 10 pm to 6 am.

The cop didn't know who Yearley was because he'd grown his hair. She just saw a couple of guys "walking in a place where there was a number of break and enters recently." She says it was around 4 am and they seemed to be trying to evade her so she stopped them. She entered the details of the interaction on a contact card in the computer right down to the false name Yearley had given her. The next day one of the detectives was reading the information and recognized the alias and new exactly who it was. Steven Yearley was arrested for breaching this conditions. It was the second time he was charged with breaching conditions. A month before he was found with cocaine according to police.

Deputy Chief Tim Farquharson says this is a perfect example of why streets checks or carding works. " This whole street check thing is part of intelligence lead policing, the proactive and the preventative piece and thats what we are paid to do"

In 2014 Peterborough Police did 829 street checks and so far this year they've done 483. They collect information like name, age and date of birth if it's given. They write down a description of the person, what they were wearing, the date, time, location and circumstances that lead to the interaction. It's stored in a police data base.

Carding in Hamilton: 5 things we learned Police have been saying for years — as recently as the chief's comments in June — they don't keep race-based statistics. Keeping that data would mean the cops could provide the kind of breakdown that has led to criticisms in Toronto, Kingston and Ottawa.

But we learned Thursday that they do keep race data and identifiers when they stop someone; they just haven't before analyzed that data.

The rate is especially disproportionate for black people, who made up 3.2 per cent of Hamilton's population in 2011. Between 11 and 14 per cent of the street checks done in Hamilton were on black people between 2010 and 2014 -- a rate three to four times the population.

Black people are stopped, questioned and documented in police street checks at a disproportionate rate compared to the population in Hamilton, police statistics presented Thursday show. 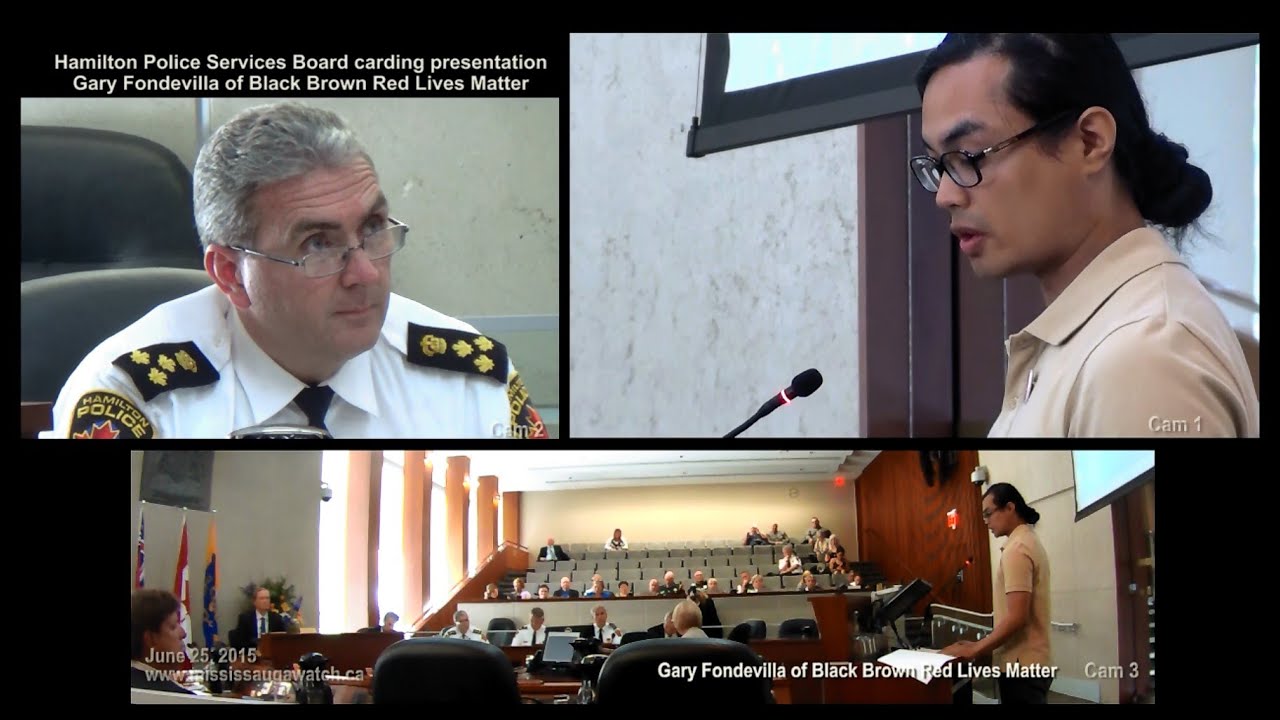 And the information recorded in all such stops is kept indefinitely in a police database.

In the police statistics, 75 to 80 percent of the street checks every year were done on white people — a finding that Chief Glenn De Caire and board chair Lloyd Ferguson cited as proof the service has no problem with racial bias.

But when compared with the percentage of Hamilton's population that is visible minorities, the numbers showed a disproportionate impact.

The findings came as part of a report to the police's oversight board, responding to concerns raised that the practice is racially skewed and an infringement on privacy rights.

Deputy Chief Eric Girt presented information to the board about its street checks, commonly called carding in Toronto.

Girt defined "street checks" as "police engaging with the community members for investigative purposes" and said they work: Information gathered in street checks is helping to solve a current homicide investigation, he said.