Last week, we showed how police brutality is one of America's most popular exports to the UK. It's gaining ground in Canada too, with their own cases of deaths at the hands of police, brutality, tasering, raids and unnecessary animal killings. We just don't always hear about it, what with our own average of three citizen deaths a day by police. It's hard to beat the U.S. at a Police State, but Canada is on its way to full emulation. 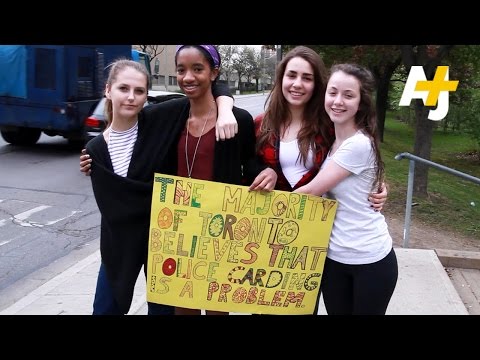 In the U.S. getting "carded" - asked for ID when buying alcohol or cigarettes - can either be an annoying occurrence or a little self-esteem boost depending on age. "Carding," however, is an ominous word in Canada because it's their word for "stop and frisk" which is regarded as controversial. It's conducted differently there (see below).

The efforts to unite and stop police brutality and press for accountability have been fragmented by blurring the actions and highlighting them as racism. However, when it comes to carding, race does play a role because it includes profiling the next victim of harassment, just as in stop and frisk.

Toronto's new and first black police chief is finding it a little difficult to explain to the entire community why carding and profiling are "necessary."

Carding is also called "street checks" by police, involves interrogation and ends with request for ID and recording the person's information. But the ID is not why it's called carding.

Carding and street checks: What they're saying in Hamilton and other cities

Cities across southern Ontario are debating a controversial tool police use to solve and prevent crimes. It's called "carding" in Toronto and "street checks" elsewhere. The practice is a means of documenting interactions police officers have with people on the street who may not be under investigation or witness to a crime, and then logging that information in a database. In Hamilton, the discussion heads to an oversight board meeting for the Hamilton Police this Thursday. A representative of an anti-racism activism group called "Black, Brown, Red Lives Matter" will call for more clarity about street checks and raise concerns about the potential for police racial bias in determining whom to stop and question.

Elsewhere in the province, mayors and police chiefs have been weighing in on the practice of "carding or "street checks". But to this point in Hamilton, activists and a councillor have been the loudest voices in the conversation. How important a tool is it? Police statistics show in Hamilton there are 10 to 15 street checks daily.

Police rely on these contacts and conversations, which they say are not done randomly, to proactively lead them to answers on crimes nearby. Critics of the practice say it infringes on citizens' rights to privacy and may impact certain people, like visible minorities, more than others.

While the police practice of carding may be controversial in Toronto, Halton Police Chief Stephen Tanner says no one is complaining about it here. At Thursday's Halton Regional Police Services Board meeting, Tanner was asked about 'carding'.

The chief said "field contacting" has been in place in Halton for decades and called it an important investigative tool. It involves obtaining the name and contact information of suspicious persons.

"There are many, many times where a police officer encounters an individual in a suspicious type of situation. It's 3 a.m., they are behind an industrial mall. There have been break-ins there recently," said Tanner.

"What is the person doing there? I think the public expects us to investigate that sort of person. There may not be grounds to arrest that person during that situation, but they are certainly a person of interest and by talking to them, police may get some intelligence information that later links someone to a crime."

Tanner emphasized the police service has policies in place to prevent field contacting from becoming an infringement on civil liberties or racial profiling.